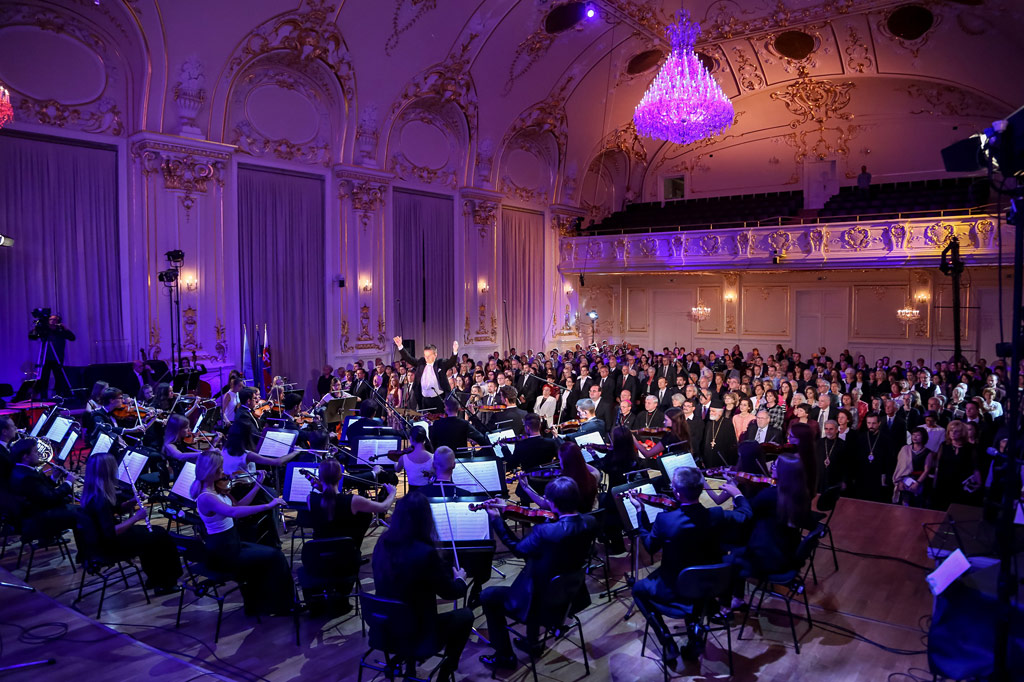 On September 20th 2015 the 11th NAPS International Ecumenical Concert was held at the Concert Hall of Slovak Philharmonic. The aim of the concert is to connect people, deepen the dialog and foster tolerance among nations and followers of different religious traditions. The concert was the final event of the jubilee 40th annual of Cultural Summer and Castle Festivals Bratislava 2015.

The event was traditionally held under the auspices of the highest representatives of five biggest Christian Churches and Jewish Religious Community in Slovakia. Event was organized by NAPS in cooperation with the Slovak Capital City of Bratislava and Bratislava Cultural and Information Center. 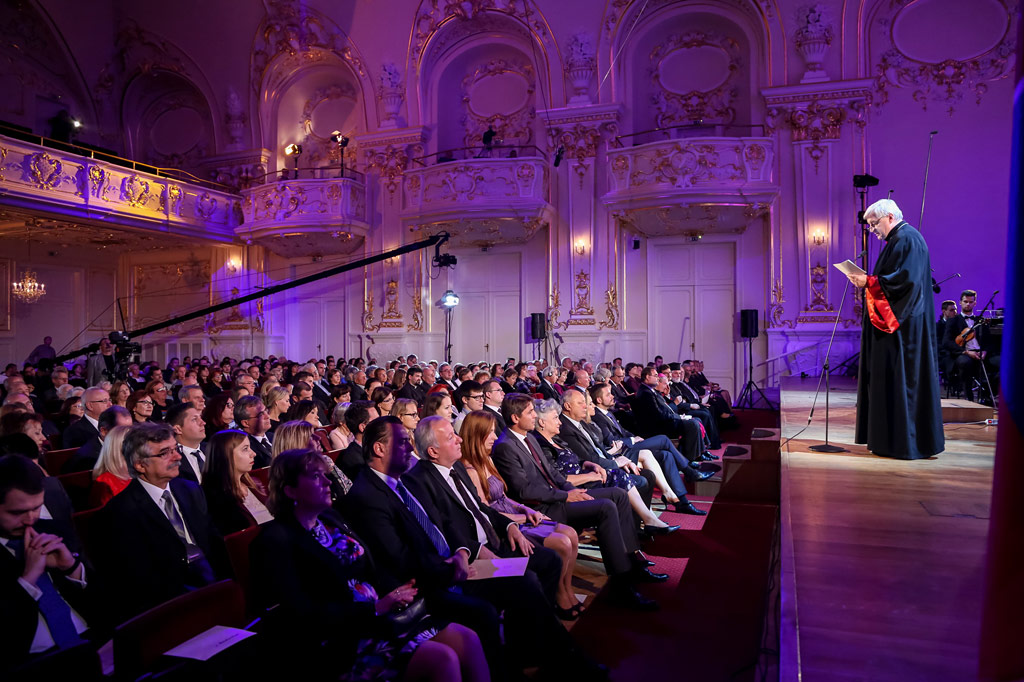 “Who wants to understand music does not need hearing, but heart. Our Ecumenical Concert wants to touch all those hearts of people of good will. These has been fostered by dozens of artists and representatives of Churches, “said for media NAPS founder Mr. Peter Solej. In its history, the event has been host to artists from nine countries, and it has been supported and endorsed by many world authorities. The fifth Concert was endorsed by the letter from HH the Pope Benedict XVI. In 2012 the Concert was held during the EU presidency year of Cyprus, and it was attended by the official legate of HRH Prince of Jordan. Ninth Concert was the official event of The Meeting of Bishops of the Eastern Catholic Churches of Europe. Last year, the jubilee tenth Concert was acknowledged by Hungarian President, HE Mr János Áder, and leader of all Orthodox followers in the world, His All Holiness Ecumenical Patriarch Bartholomew I of Constantinople. 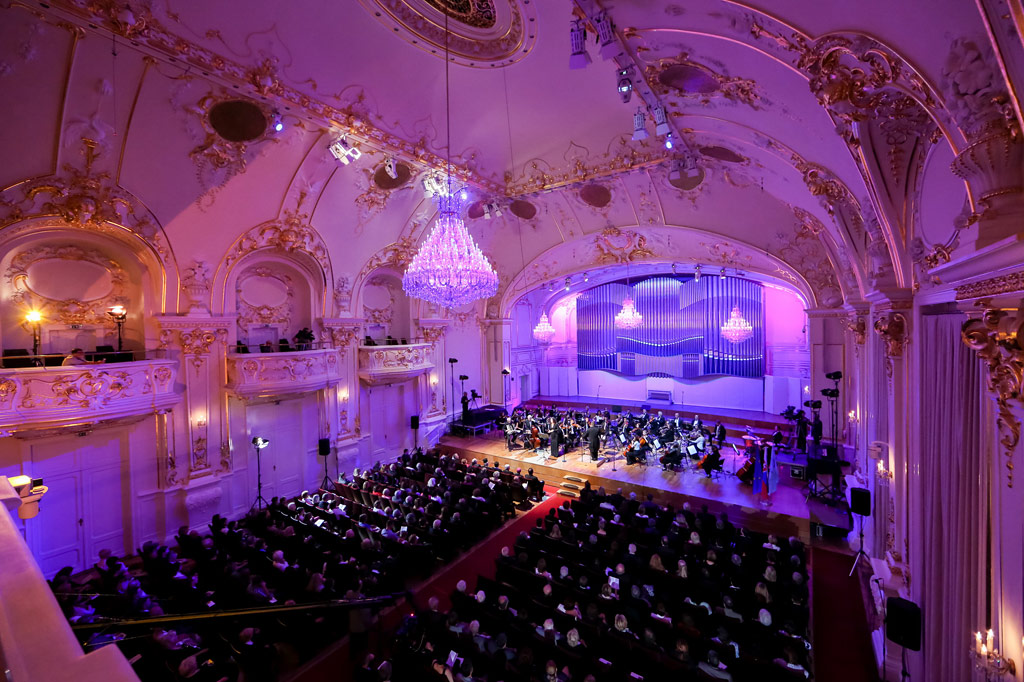 This year Concert has presented Christian and Jewish chants in various languages by Slovak, Hungarian and Czech artists. The guest star of the evening was the Slovak National Theater Opera soloist Pavol Remenár. At the finale of the event, Christian Bishops gave blessings in five different languages and were joined by the prayer of the Jewish Rabbi. 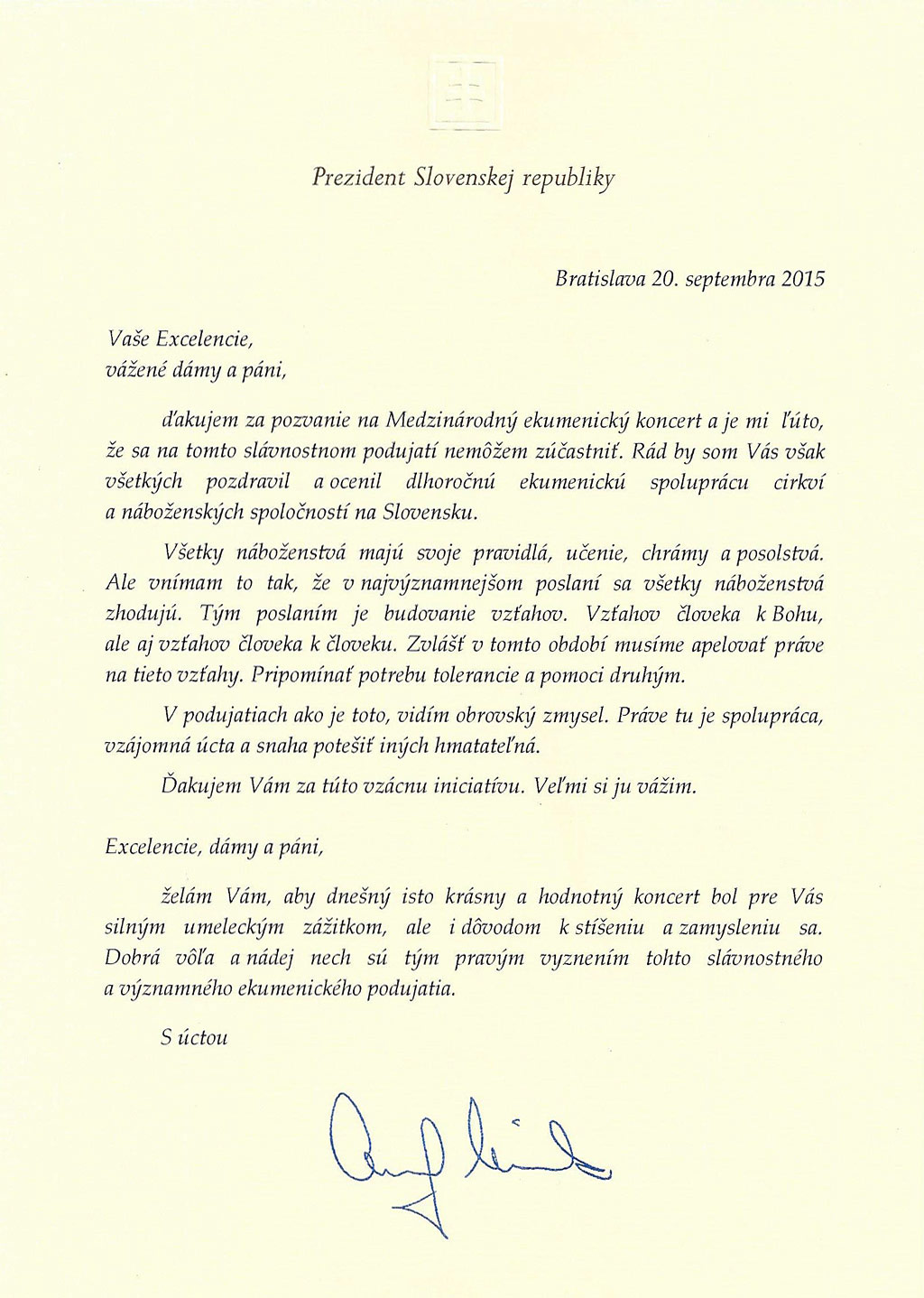 The message of the event has been endorsed by HE Mr. Andrej Kiska, the Slovak President in his letter, quoted as following: “I see a great signification in such events like this. They are a tangible proof of cooperation, mutual respect and effort to please the others.“ The Concert has been attended by the officials of the state administration, academic community, diplomats and ambassadors from 14 countries. 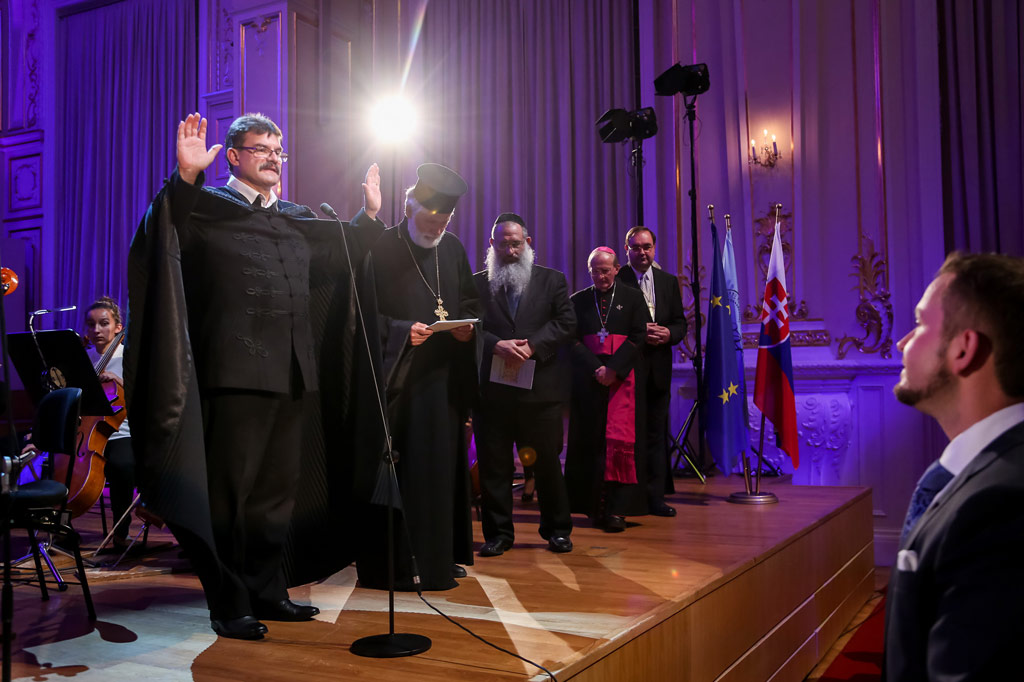 His Excellency Monsignor Stanislav Zvolenský,
Metropolitan Archbishop of Roman Catholic Archdiocese of Bratislava,
The President of the Catholic Bishops´Conference of Slovakia,

The Reverend Mr. Miloš Klátik,
General Bishop of the Evangelical Church of Augsburg Confession
and President of the Ecumenical Council of Churches in Slovakia,

The Very Reverend Mr. László Fazekas,
Bishop of the Reformed Christian Church in Slovakia
and Vice-President of the Ecumenical Council of Churches in Slovakia,

His Beatitude The Most Blessed Rastislav,
Orthodox Archbishop of Prešov
and Metropolitan of Czech Lands and Slovakia,

The Esteemed Prof. Pavel Traubner,
Honorary President of the Central Union
of the Jewish Religious Communities in Slovakia. 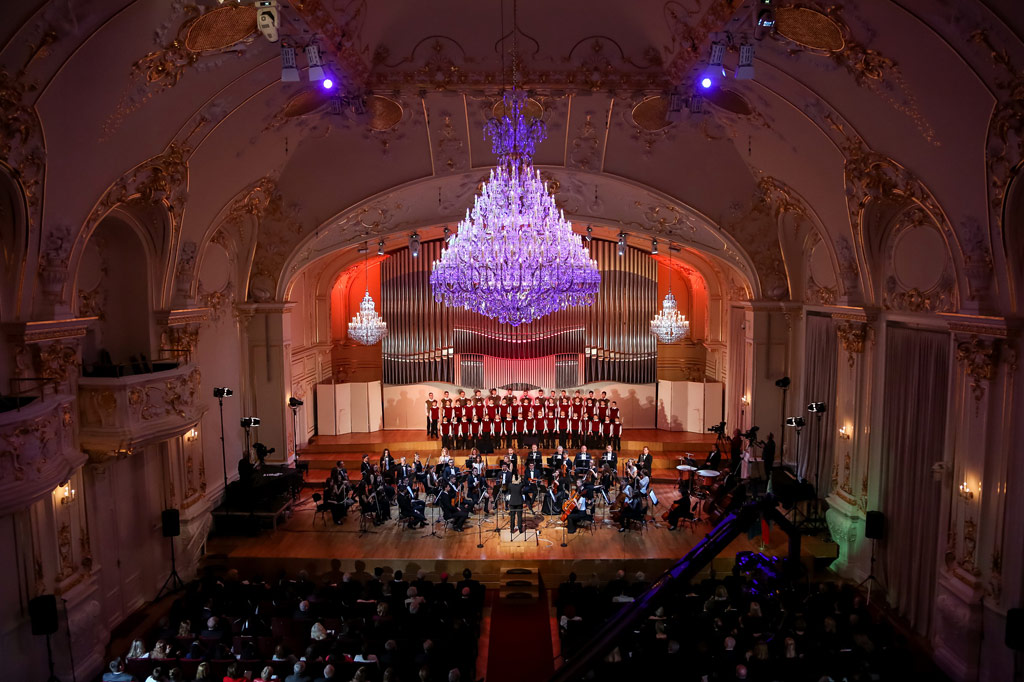 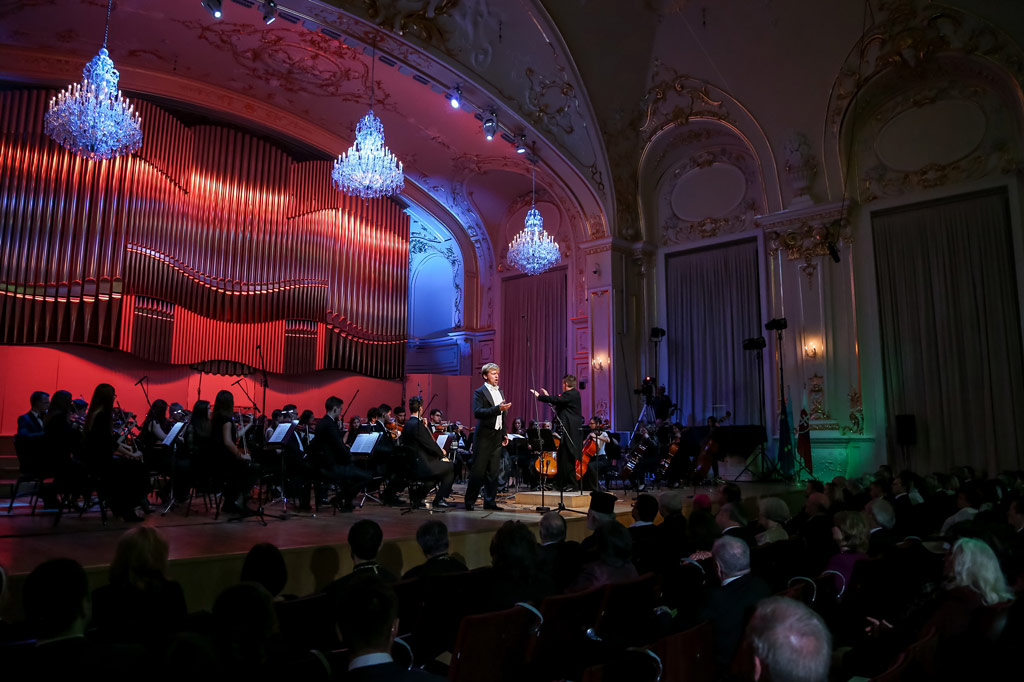