On Thursday, 7 September 2006, an ecumenical concert of sacral songs was held at the Andy Warhol Museum of Modern Art in Medzilaborce which is one of a kind in Europe. With the participation of representatives of the leading Christian Churches and the Jewish religious community, the event’s objective was to synchronize the sacral and modern art with the aim of bringing people together, deepening inter-religious dialogue and supporting mutual tolerance.

The event was opened by the arrival of the Guard of Honour of the Slovak Armed Forces while the song Hoj vlasť moja had been sang, greeting of the first President of the Slovak Republic, His Excellency Mr Michal Kováč and paying respect to the Slovak anthem and flag.

In the opening speech, Peter Solej, the President of NAPS mentioned a story which had happened during the preparation of the concert. He met with a person who thinks that nobody believes in ecumenism; apparently, it is only a cliché and the world is all about business. Peter Solej believes that ecumenism is the finest tool to reach the goal; for all to become one. According to Solej, ecumenism can never be a cliché.

The cultural part of the event included performances by the Roman Catholic Choir of St. Cecilia at the St. Elisabeth Cathedral in Košice, the choir Chorus Comenianus of the Evangelical Church in Košice, the choir FIRESZ of the Reformed Christian Church in Slovakia, the Greek Catholic choir CHRYSOSTOMOS from Vranov nad Topľou and the Club of Byzantine culture of Saint Cyril and Methodius in Michalovce, which together represented five leading Christian Churches in Slovakia.

After the performance by the singer of Jewish songs from Bratislava, Mr Ervín Schönhauser, who at the age of four experienced the horror of concentration camps, President Michal Kováč spoke to a 500-people audience; on behalf of the President Ivan Gašparovič, the audience was greeted by the Director of the Regional Office of the Office of the Slovak President in Košice, Oto Sabo.

The ecumenical event culminated with a blessing given by the Roman Catholic Bishop S. Stolárk, the Bishop of the Reformed Christian Church G. Erdélyi, the Greek Catholic Bishop J. Babjak, the Orthodox Bishop Tichon and the Jewish rabbi J. Steiner in the Latin language, Hungarian language, Old-Slavonic language, Greek language and Hebrew respectively. After the blessing, the Greek Catholic choir and the Orthodox choir sang an ode Budi imja Hospodne blahosloveno and the opera singer Jaroslav Dvorský performed the song Agnus Dei in the Latin language.

After the soldiers of the Guard of Honour of the Slovak Armed Forces had left the room under the ceremonial Gesang of the song Kto za pravdu horí , the event continued by a display of works of art by the world famous artist Andy Warhol, the founder of pop art and reception in Eurohotel in Medzilaborce.

This event was held under the moral auspices of:

His Excellency Mons. Alojz Tkáč,
the Metropolitan Archbishop of the Roman Catholic Archdiocese of Košice,

The venerable Igor Mišina,
the Bishop of the Eastern District of Evangelical Church of Augsburg denomination and the Chairman of the Ecumenical Council of Churches in Slovakia,

The Very Reverend Géza Erdélyi,
the Bishop of the Reformed Christian Church in Slovakia,

His Eminence Despotis Ján,
the Orthodox Archbishop of Prešov and Slovakia,

Mr. František Alexander,
President of the Central Union of Jewish religious communities in the Slovak Republic. 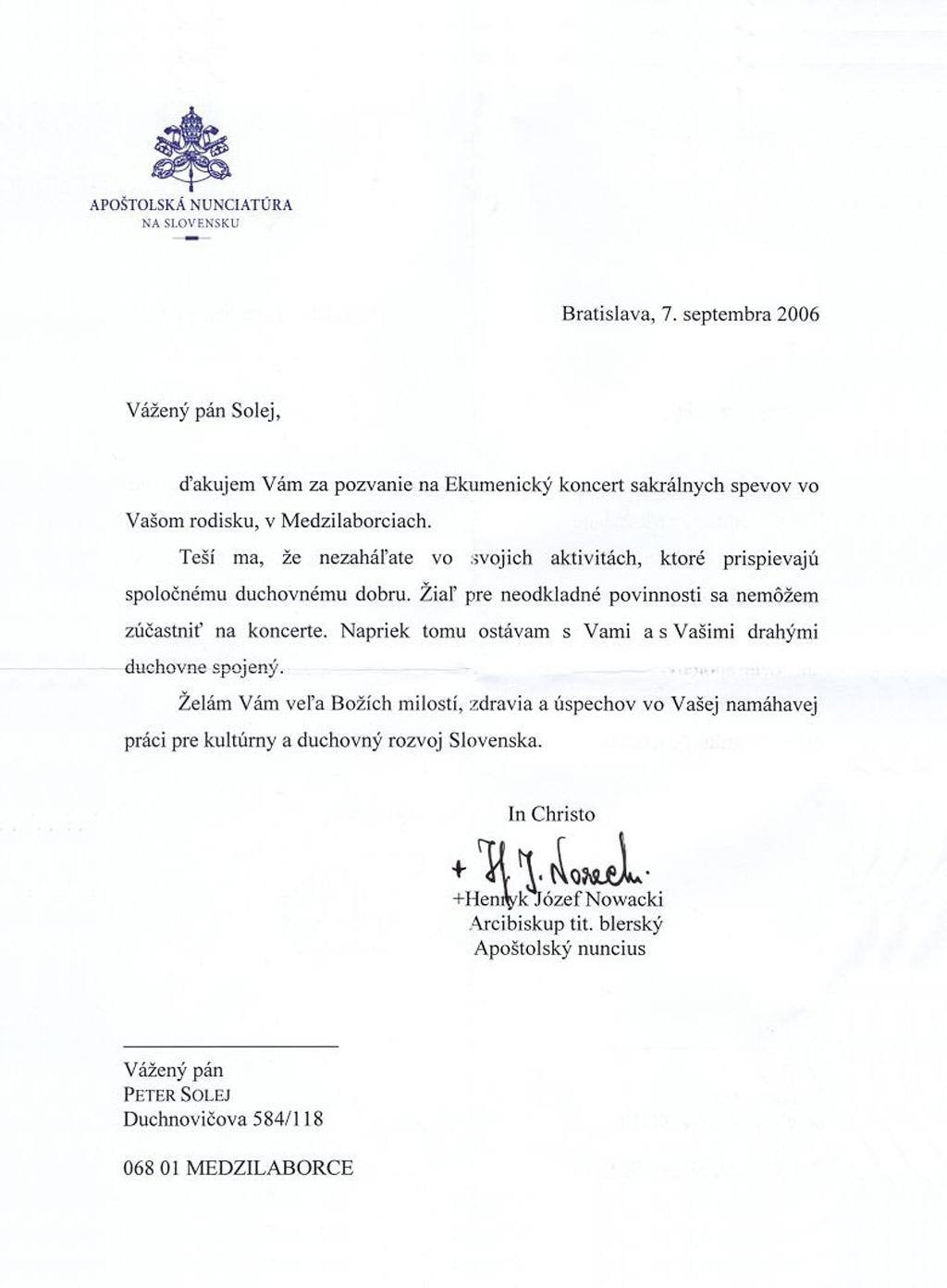